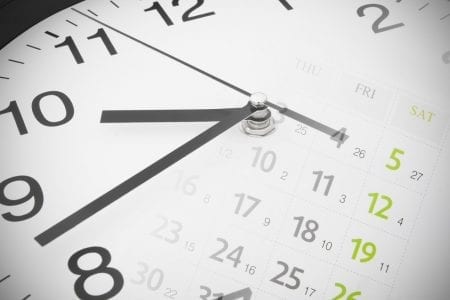 A divorce can be done quickly or can take months or years.  In general, the timetable for a divorce case depends on how litigious the case is, the complexity of the case, compliance with temporary court orders, and the attitudes of the litigants.  Gunnar J. Gitlin discusses the divorce timetable in greater detail.

Is there a typical timetable for a divorce case?

Yes, but having said that, my experience is that hardly any divorce case is typical, so the below time frames, and what happens, are not as reliable as the sun rising in the east every morning.

How is a divorce suit started?

By filing of a petition for divorce (dissolution of marriage) with the Clerk of the Circuit Court  The clerk issues a summons and then a deputy sheriff or private process server serves the summons on the other side (defendant). Other alternatives are window service or the Defendant filing an appearance voluntarily.

What does the summons require the defendant to do?

The summons tells the defendant he has 30 days to file an appearance and file a response to the petition. In practical terms it means that by the 30th day you should have hired a lawyer, or if you intend to represent yourself, then you should file your own appearance (forms available at the clerk’s office) and file a response (no forms) either admitting or denying the allegations of the divorce petition.

What is the purpose of the response?

The response informs the judge and the opposing party and counsel of the matters that are being denied, so if there is a trial, these are the matters that are at issue. For example, the plaintiff may allege that she is the proper parent to have custody of the children. If the defendant wishes to contest custody, or believes he may want to contest custody, this allegation will be denied.

I’ve heard about Illinois divorces requiring a parenting plan to be submitted within 120 Days. But we are living together and I don’t even want a divorce. How can we be required to do this?

Illinois law changed in 2016.  No longer does the law refer to custody and visitation. Instead, we have allocation of parental responsibilities and parenting time. And Illinois law provides:

All parents, within 120 days after service or filing of any petition for allocation of parental responsibilities, must file with the court, either jointly or separately, a proposed parenting plan.

Is there an exception to this rule?

Yes.  The time period may be extended “for good cause shown.”  But keep in mind that the law provides that “In the absence of filing of one or more parenting plans, the court must conduct an evidentiary hearing to allocate parental responsibilities.”

What is “discovery” and what is the time frame for discovery?

It is your right to have the opposing party answer questions about the marriage, such as sources of income etc. These questions are called interrogatories. There are also document production notices by which the opposite party is required to produce documents, for example bank statements, documents relating to stock trading etc. The lawyer drafts these interrogatories and production notices and mails them to opposing counsel.

In most cases, the parents exchange sworn financial statements.  Until 2016, each county had their own forms.  For example, in McHenry County, the form is called an 11.02 financial affidavit.  Starting in 2016, there is to be one uniform form for financial disclosure statements.

Often, the written discovery (interrogatories and production notice) leaves holes and this may be filled by serving records only subpoenas, subpoenas or notices seeking to take the other party’s deposition.

At a discovery deposition the opposing party, or for that matter a witness who is subpoenaed, is required to come to a lawyer’s office and answer questions under oath. The questions and answers are transcribed by a court reporter.

Usually the discovery procedure takes about four months, so by the time discovery is completed it is about five or six months from the time the case started. The time it may take to complete discovery may be substantially longer for a case with complex financial facts, such as the evaluation of a business. The discovery may also take longer if the other side does not cooperate and court orders need to be entered in order to have compliance with discovery.

When do lawyers attempt to negotiate a settlement?

Lawyers and parties need to know the facts before they can take settlement positions. Usually this means that discovery must be completed.

How long does the negotiating process take?

This depends on the complexity of the case and what is at issue. Child custody cases [now called allocation of parental responsibilities and parenting time] are the most difficult to settle. Typically the negotiations are by exchange of letters and documents, supplemented by telephone calls and sometimes in person conferences between lawyers.

Not necessarily.   Four way conferences can be either productive or sometimes counter-productive.  There are several reasons for this.

First, often the four way conference is scheduled before everyone knows all the facts. You must know the size of the pie before you can divide it. Second, lawyers will often “showboat” to impress their clients and this is a poison pill to the negotiations.

My approach to four way conferences is except in collaborative divorce cases they should be conducted only after all the facts are known and there has been an agreement in principle as to the major terms of settlement, so what is left to decide are the details and plugging in some figures, and this should be done on the basis of an agenda and a pre-agreed time length for the four way conference.

What is a settlement (pre-trial) conference and when does it happen?

Opportunities to settle the case may occur at any time that the parties and lawyer are all together, for example, when there is a court appearance requiring everyone’s attendance, or at a deposition. The most likely time for a case to settle is at the settlement conference.

The memo then urges the judge to make settlement recommendations which the party and lawyer want. Settlement suggestions should be backed by reasons. The judge and the lawyers go into chambers (the judge’s office) and discuss the facts of the case, the law, and each lawyer’s argument as to why the lawyers’ proposed settlements should be recommended by the judge.

The judge, in making recommendations, has not decided the case and the parties are entitled to go to trial, but unless the facts of the case come out differently at trial than the judge believed them to be at the settlement conference, the judge’s pre-trial recommendations should be heeded.

If it appears the case is going to trial, there is another conference between lawyers and the judge (Case Management) to work out the logistics of the trial.

What if the issue of child custody (parental responsibility) is contested? Are there special hoops to jump through?

Yes. First, whether or not the issue of the allocation of parental responsibility or parenting time is contested, the parents must participate in a parenting class before the court can enter a final judgment. The cost of the parenting class is $90 per parent. Classes are held at McHenry County College. It is a four hour class.

If the issue involving issues of allocating parenting time or allocating how major decisions involving the children may be contested, the rules of court require mediation. The mediator attempts to assist the parties in resolving the issue. Often, if mediation does not reach an agreement one of two steps make take place: 1) the appointment of a guardian ad litem or 2) an evaluation by a mental health professional.  This professional would interview of people who have knowledge of pertinent facts including the parents, the children and may psychological testing of the parents.

How long will it take for the case to come to trial?

This issue is county specific, and it also changes from time to time.

How long will the trial take?

Typically three to four days. In many courts, trials are set for afternoon settings that involve a half day starting at 1:30 p.m.  But in non-complex cases, where it is only the husband and wife who testify, it could be a one-day trial. On the other hand, in Cook County there was recently a complex, and highly contested case, in which the trial lasted for 60 full days.